Lung cancer is the leading cause of cancer-associated death in men and women in the United States. Currently, the recommended treatment for early-stage lung cancer patients is surgery, which may be followed by chemotherapy in patients with high-risk, margin-negative tumors, as determined by the tumor pathology. Despite therapeutic advances and these current guidelines, up to 30% of early-stage lung cancer patients suffer a recurrence within 5 years of curative surgery. We set here to build novel machine learning predictors for identifying patients with high risk of recurrence following curative surgery, based on a broad range of molecular data measured from each tumor. This will lead to more accurate predictors of patient's response to curative surgery and will also illuminate new therapeutic options (and biomarkers) aimed at reducing the levels of post-surgical recurrence.

Cancer is a disease of the genome, and DNA-targeted drugs including cisplatin and topoisomerase inhibitors remain the most widely used anticancer treatments; yet a large number of patients fail to respond to these cytotoxic agents, and it is presently not possible to distinguish responders from non-responders. To precisely use DNA targeted drugs, it is essential to understand the molecular networks that determine treatment responses. The existence of large cancer cell line databases with whole genome and extensive drug response analyses provides novel opportunities to recover elements of these networks, and examine their integrated behavior. Our project is designed to discover and experimentally validate predictive genomic determinants of response to DNA targeted drugs using novel algorithms, with the ultimate aim of rationalizing the precise use of topoisomerase inhibitors and their combination with other drugs for cancer patients.

In our (unfunded) application last year, we proposed the highly significant aim of unraveling the crosstalk between Ras/Raf-elicited MAPK and Ras/RASSF5-elicited Hippo signaling by deciphering the enigmatic mechanism of RASSF5 tumor suppressor action; MAPK signaling promotes cell proliferation, whereas Hippo’s abolishes it. During the last year, our large scale simulations at the NCI have helped in crystallizing the hypothesis underlying the first aim [1-3] (Fig. 1) and on-going NMR experiments at UMD (preliminary results below) aim to test it and provide leads to further refine it. Our faster than anticipated progress allows us to also take up the critical aim of Ras activation via SOS-mediated GDP→GTP exchange by resolving the question of how SOS activates Ras (work has initiated). Accomplishing the aims of Ras activation by SOS, and RASSF5 activation (thus Hippo’s signaling) by Ras will provide a broad view on tumor proliferation, helping drug discovery efforts. 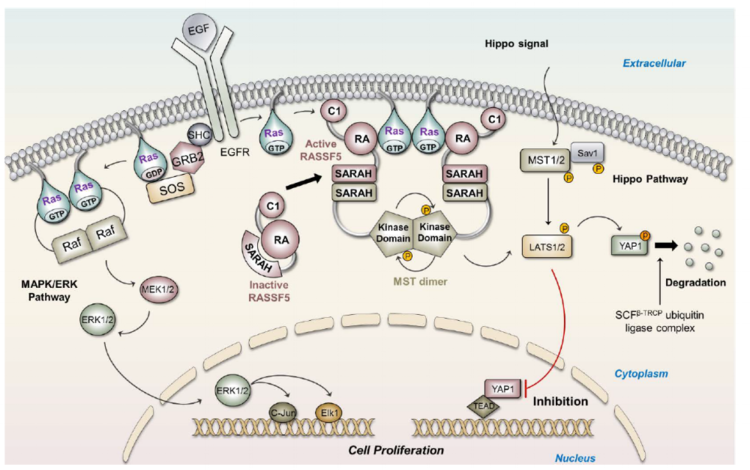